On the Way to Mantova - Part II

This post continues with the theme of mail connected to the Italian city of Mantova/Mantua.  This entry is focused on the letter below that was mailed from Montpellier, France to Mantua on February 9, 1857.

This is part two of a series:

Another Letter to Louis Sartoretti, avocat

This is another envelope from the correspondence saved by a Mantovan lawyer in the 1850s named Louis Sartoretti.  Since, neither of the items in my collection have contents or provide an indication as to who sent these pieces of letter mail, I am not able to determine if these were private or business correspondence.  However, odds are good that they are the latter.

If you looked at the prior post, you could notice a number of differences.  First, there is only one use of the honorific "Monsieur."  Second, the sender did not see fit to provide any postal instructions for directing this letter.

And, third, there is the mysterious "Daun" that follows Mantoue.  Of course, it is possible I am reading the letters incorrectly.  It could be a shorthand reference to something else.  It is also possible that the writer misspelled something.   At this point in time, I have no idea.  It appears to have some sort of significance in naming a region - but I cannot be sure at this time.

Um... You Need to Pay More than That!

As we mentioned in the prior post, the cost to mail an item through Sardinia to Lombardy from France was 1 franc (100 centimes).  This rate applied for pre-paid mail as well as unpaid mail.  However, there was no provision to provide credit for partially paid mail.  Therefore, part paid mail was treated as unpaid at the destination.

This item bears only a 20 centime stamp, clearly not enough to do the job.  The hand-written "timbres insuffisant" can be translated to "insufficiently stamped."  That, and the absence of a "P.D." marking made it clear that this item was not pre-paid.

As a result, Monsieur Sartoretti was forced to pay 25 kreuzer - the full price that it would cost for him to mail a letter to Montpellier, France - just to receive this letter and find out what was in it! 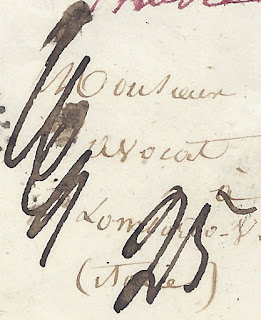 The scribbles shown above actually DO mean something.  As most people would guess, the "25" is the due marking, instructing the carrier or clerk to collect 25 kreuzer to pay for the mail services from France to Lombardy via Sardinia.  The smudged scribble on the left should be read as "16/9."   These are amounts to be sent back to the other mail systems that provided mail services that had not yet been paid.

The amount of postage collected was 25 kreuzer, of which 9 kreuzer covered the Austrian postage (the lower number).  The remaining 16 kreuzer needed to be given to the French and Sardinian mail services.  Of those 16 kreuzer, the French received 12 kr and the Sardinians 4 kr.

It would be tempting to calculate the breakdown from the French perspective by using simple ratios, multiplying each of these by 4 to get the equivalents in French centimes.  However, I have learned over time that this is not always going to be the case.  Therefore, I will await a time when I can read the original postal agreements to determine what the breakdown was from the French perspective.

As for the 20 centime stamp?  Well, it really did not do anything, in the end.  This was not an uncommon occurrence during the transition to using postage stamps to show payment of postal services.  Part of the logic might be an assumption that at least the internal postage must be paid.  In the end, it is impossible to tell whether it was misinformation, misinterpretation or the fact that the envelope already had a stamp on it and they just needed to use it.

Getting from Here to There

The markings on this cover:

The travel time for this letter was much shorter than it was for the other letter we show in the prior post, only four days total.  However, the square marking on the back (Arr di Notte) indicated that the letter did arrive during the night time hours.  So, the letter was not available to our lawyer friend until the 14th of February. 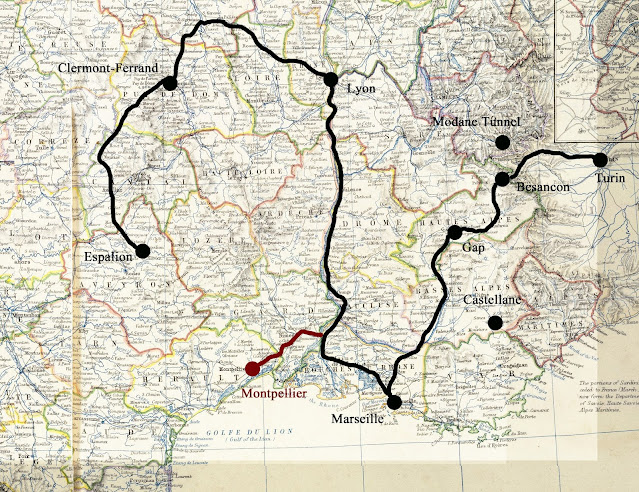 Here is the map from the prior post with a small addition showing the route from Montpellier to the rail line from Lyon to Marseille.  This section was covered by a railway at the time this letter was posted in 1857 (Montpellier to Nimes should have been completed by the end of 1856).

Once in Marseille, this piece of mail likely followed the same route that the first letter did, heading up to Gap and then Besancon - on the way to Turin.  Only, this time, we have evidence that it went this way because there is a postal marking for Gap.  Most of this part of the route would still have been by mail coach until it reached the rail spur west of Turin.

Shown above is a portion of an 1855 map that clearly showed the rail lines running from Turin to Milan then Verona and a spur down to Mantua.  While Italy was behind much of Europe for rail development, the major northern cities were connected.

Below is a portrayal of Mantua in 1575.  At this time, the city was surrounded by man-made lakes created by diverting and damming the Mincio river.  By the time we get to the 1855-1857 period, the 4th lake, Lake Pajolo (south & west), is now dry.  This still provided for a defensible position from a military perspective - thus the Austrians maintained a stronghold there as a part of their 'Quadrilatero' of fortresses in Lombardy-Venetia. 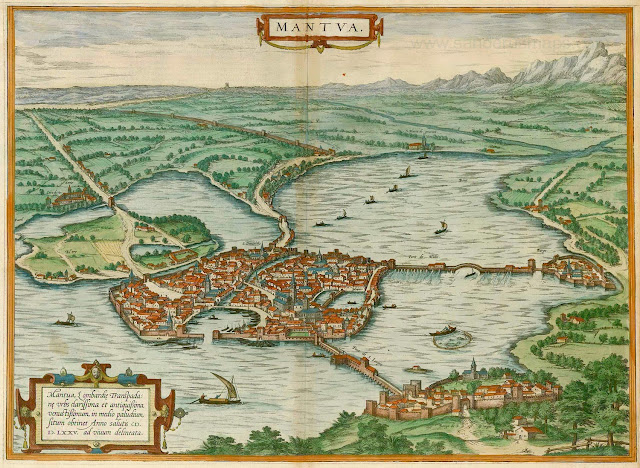 I could not help but notice that these two posts for Mantova has attracted the attention of some philatelists on the forum at Filatelia e Francobolli.  I apologize that I do not know much Italian, but I welcome you here.   If you have suggestions or corrections, feel free to make them and we will do our best to understand each other!