It is hot, sunny, and windy on the farm today - making it a perfect day for us to cultivate in the morning.  Cultivation tends to lift weeds up, exposing their roots to the elements.  A hot dry day is perfect for rapidly ending a weed's viability.  Imagine your worries and troubles are a field of weeds.  Now, drive that cultivator out there and lift those weedy problems out of the soil so they can whither and fade away.

I bet you were wondering how I was going to get that one to work.  I know I was!

Now that we've taken care of our worries, let's learn something new and have a little fun.

Today we're going to transport ourselves back to the mid 1860s.  For those who have enjoyed a few Postal History Sundays, you might not be surprised by the time period because that's the area of postal history I am most familiar with.  This time, I want to look at mailing something from the United States to the newly formed Kingdom of Italy.  What choices would you and I have for sending a letter to Italy?

* British Open Mail rates did not pay for all of the mail service.  The recipient would have to pay for mail services from Britain to the destination in Italy.

To summarize.  If you wanted to mail something to the Kingdom of Italy, you could choose between sending it via France, Prussia, Britain, Bremen or Hamburg.  Each cost a different amount of postage.  In some cases, it actually mattered WHERE in Italy you were sending an item.  To make it even more difficult, some routes were tied to particular shipping companies that crossed the Atlantic Ocean.  You might get a better postage rate, but there could be a significant delay if you didn't hit that shipping schedule properly.

And... I even simplified the options available to you a little just to keep it ...easy to understand?

Ok, let's just say you had lots of options and variables to consider.  It wouldn't be a surprise if you were confused by it all.  What often amazes me is that the foreign mail clerks were often able to make decisions for the best routing of mail when conditions warranted a change and despite the complexities most of the mail appears to have been handled without error.

Here is a letter that was mailed in New Brighton, Pennsylvania on August 20, 1863.  Thirty cents of postage have been applied to the letter and it was accepted as fully paid.  Exactly which rate was this person trying to pay?  I don't see a 30 cent rate anywhere in that table!

The letter is addressed to Florence, which is in Tuscany (north Italy).  We can eliminate the Prussian rate because it was higher than 30 cents.

To make a long story shorter, I'll just tell you!  The sender was attempting to send this item via the Hamburg mail service, so the postage rate would have been 28 cents per 1/2 ounce to get to Tuscany.  BUT, for some reason, this item was sent via the French mail service at the 21 cent rate per 1/4 ounce.

So, the question is - how do I know all of that? 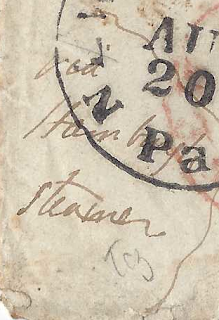 Two pieces of evidence seem to indicate that the person mailing this expected this letter to go via Hamburg.  The first is the 30 cents in postage (a convenience overpay of 2 cents).  The second are the words "via Hamburg steamer" at the bottom left corner.

This letter did, in fact, leave New York's harbor on the Hamburg Line's Saxonia.  But, for some reason, the foreign mail clerk decided that the letter should go via the French mails (as indicated by the New York marking with the "12" cent credit to France).  This is further confirmed red French marking in the center of the envelope and the boxed marking in red that has "PD" in it (also French).

This is interesting because the Hamburg steamer carried mailbags that were meant to go to and through France AND these steamers carried mailbags for letters sent via England as well as mailbags to go to Hamburg.  Each Hamburg steamer would make a quick stop at Southampton (England) and drop off mail that could go to or through France or England.  Since this was in a mailbag to go via France - it was dropped off there on September 3, rather than staying with the ship when it arrived at Hamburg on September 5.

The next question is why?  Why did the New York foreign mail clerk make this decision to send a letter to Tuscany, Italy via France?

The short answer is that I cannot be certain.  What we need to understand is that the foreign mail clerks were often aware of potential mail delays and would often override the expected route when two conditions were met:

It is possible that they had learned that letters via Hamburg were typically slower to Tuscany than those going through France.  Maybe there was some sort of transportation issue on the route via Hamburg.  Perhaps the foreign mail clerk had a brother working in the French postal system and he wanted to support him?

I can't say what the reason was, but I'll keep my eyes and ears open in case the reason becomes apparent someday.

Below is a folded letter on blue paper that was sent from the United States to Naples in southern Italy.  Even though the Neapolitan area had been a part of the Kingdom of Italy for a few years, postal rates in some cases still treated this as a separate entity.

The letter went through the New York foreign mail office and was slated to leave via the North German Lloyd ship called America on July 21.  It would stop at Southampton on July 31 and go on to Bremen on August 2. 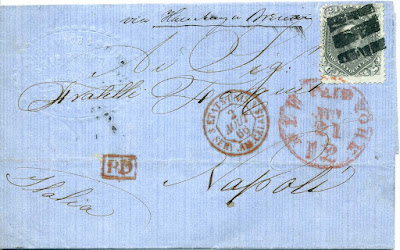 The scrawl in black ink at the top of the envelope reads "via Hamburg or Bremen."  Clearly, the intention was to send this item via one of those mail services at the 22 cent rate per 1/2 ounce.  Like the first letter, it left on a steamship that was going to one of those two cities (Bremen this time).  But, like the last letter, it was also off-loaded at Southampton and sent via the French mails and their 21 cent per 1/4 ounce rate.

There was this little thing that is often referred to as the Seven Weeks War (Austro-Prussian War) going on.  Technically, the final battle of that war was July 24.  But, at the point this letter was mailed, the postal clerk knew that the route from Hamburg or Bremen to anyplace in Italy was going to be uncertain.  So, they re-routed this letter via France. 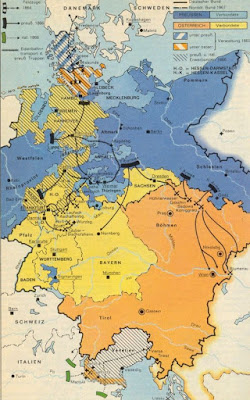 The map above shows the troop movement and conflict locations for the Austro-Prussian War of 1866 (you can click on the map to see a larger version).  If you look towards the north, you can find both the cities of Bremen and Hamburg.  The typical routes for mail from those cities would often go via Switzerland.  But, with the conflict, pretty much any route from either of these cities was uncertain, even if both cities were receiving mail ships with no interference.

And there you have it.  One letter that was diverted from what was likely it intended route for no specific reason I have been able to determine and another that had a VERY good reason to be sent on a different route.  Perhaps, one day I will find evidence that shows me the logic for the first routing change.  When I do, you'll probably read it here on a new Postal History Sunday post!

Thank you again for joining me as I share something I enjoy and we all take the opportunity to, perhaps, learn something new.

If you would like to learn more, or if you wonder what resources I use as I research postal history artifacts, here is one such item:

This book is still recognized as the best resource for anyone seeking to find U.S. foreign destination postage rates during the 1847 to 1875 period.  The tables take some getting used to and it becomes easier to use as you learn more about postal history for that period.

If it weren't for the efforts of people like Charles Starnes, it is entirely likely I would not have found this hobby to be as enjoyable as it is for me.  So, thank you to the late Mr. Starnes and all others who have gone before me and shared the knowledge they have uncovered.

Have a great remainder of your weekend and a fine week.
Posted by Rob Faux at 5:00 AM 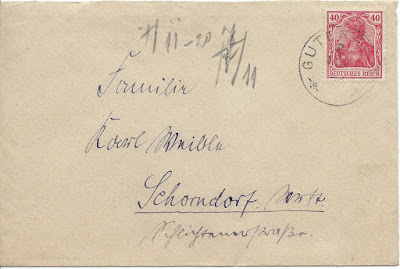