How You Slice It - Postal History Sunday

Welcome to this week's Postal History Sunday on the Genuine Faux Farm blog and the GFF Postal History blog.  This entry comes to you LIVE (ish) from Chicagopex in, not surprising at all, Chicago!

One of the things the farmer enjoys doing is sharing his exhibit (display) of his postal history that features the 24 cent US 1861 stamp.  Yes, that's the topic of last week's PHS.  Good for you for remembering!

Just as I reported in August, when I attended the Great American Stamp Show, there was a competition for those who, like me, wish to show our work on various topics related to philately (stamp collecting), postal history, deltiology (postcards), and other similar areas.  I must admit that participants see the competition part in different ways.  I, for example see this as mostly a competition with myself to see how well I can convey information to others.  To me, this is a teaching and learning opportunity more than anything.

It just so happens that I have also had some success with the competition with others part as well.  I am certainly pleased with that, of course, but the introvert in me sometimes struggles with how to take that sort of success - so I focus on the internal push to improve.

I spent some time walking and viewing the various exhibits the past couple of days and I have been struck by all of the ways we find to determine the focus and limits of the topics we choose to display.  What each of us shows depends on

How We Slice It 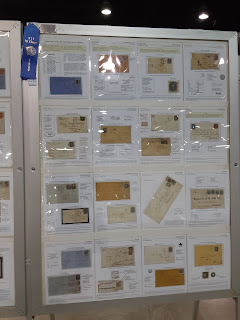 One of the tricks to creating an enjoyable exhibit is to identify a subject area, but that subject area has to provide a reasonable set of boundaries.  For example, I could do an exhibit on "postal history," but that is far too broad.  To make a long story short, I use a particular stamp issue (the 24 cent US 1861 stamp) to slice a chunk out of the bigger topic and give what I show some focus. 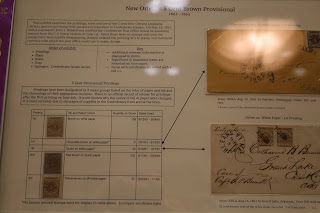 My exhibit is seven frames in length and each frame holds 16 pages (8.5 x 11 in sheets).  But, not every exhibit lends itself to the same amount of space.  Doug Weisz shared a one frame (16 page) exhibit that focuses on a single stamp that was issued in New Orleans after Louisiana seceded from the Union (New Orleans 5 Cent Brown Provisional 1861-1862).  Selection of this particular stamp effectively limits the date range (1861-62) and the geographical region.

(Doug was a winner of the Reserve Grand Award for single frame exhibits.  Nice job Doug!) 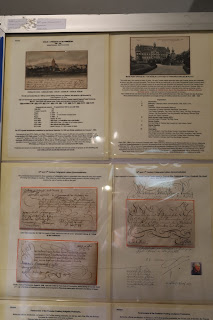 Of course, you can go the other way and limit your topic with geographical limitations.  Harold Peter brings this down to a fine point by showing postal history from Koslin - A Prussian City in Pommerenia.  Harold also limits the topic by giving us a time range from 1588 to 1945, which is... well, let's just say that the time frame doesn't limit the topic much.  But, if you click on the image above, you might be able to see that the first letter shown there is from 1588 - which is impressive no matter how you slice it.  (apologies for the blurry photo) 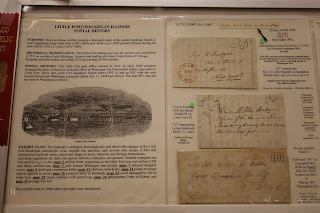 Ed Fitch does something similar with his Little Fort/Waukegan Illinois Postal History - but Ed has a much shorter history of postal services to pull from (starting in 1841) and probably a smaller population.  In both cases, the limits make it very clear what belongs and what does not in each of their exhibits.  Mail that came from, went through, or was mailed to these locations qualify.  Unless the exhibitor can make an excellent case for some other sort of item, the boundaries are clear. 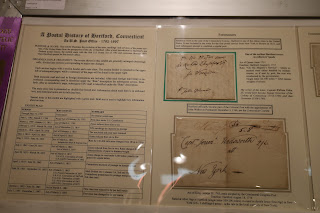 Another excellent example at Chicagopex of an exhibit that shows a geographically bounded topic is Anthony Dewey's A Postal History of Hartford, Connecticut (1792-1897).  Part of the competition is to clearly and completely show the topic you have selected.  The exhibitor sets the goals and then strives to meet them.  The judges determine how well you meet these goals.  In addition to meeting your expressed goals, you try to do so with a display that is attractive and communicates well with the audience.  Anthony's exhibit is beautifully executed and is easy for me to follow. 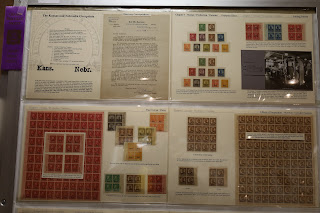 Speaking of beautifully executed, I have to give another shout out to Vicky Hadley for her Kansas and Nebraska Overprints.  Vicky's layout gives a person the feel that everything has the space it needs and no more than it needs.  There are places where there are layers, making use of a third dimension of space.  But, this exhibit brings out another part of the competition, illustrating that you know your topic and you can communicate to others what you know about it.  If I had a question about the Kansas and Nebraska overprints, I know exactly where to go. 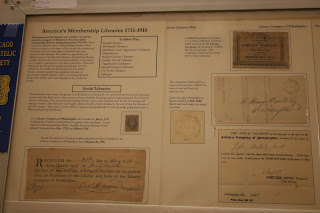 There are other options for selecting a topic area, for example, you could select a topic that has nothing to do with a specific stamp issue or geographical location.  You could, for example, find material that shows connections to something like... oh... libraries?  America's Membership Libraries 1731-1910 by Larry Nix shows all sorts of items, including a wooden bookmark to tell his exhibit's story.  A topical exhibit, such as this one adds the extra challenge that there needs to be sufficient connections to the postal realm - since this is a stamp show.  Larry is one of the masters in this type of exhibiting.

(Larry received the American Association of Philatelic Exhibitors Award for Epilogues for his approach to closing out his exhibit.  Well done Larry!)

And, Susan Jones moves the concentration away from stamps, postal history and geography and pushes us to enjoy the artwork. 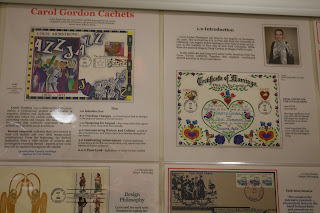 Susan shows a ten-frame exhibit titled Carol Gordon Cachets.  While you can view envelopes that have postage stamps on them that are postmarked, this is not what she wants us to appreciate.  Instead, it is the design (cachet) that has been applied to the envelope.  The design is often typically related to the design on the postage stamp being shown.

Here is where my own personal bias begins to show.  Since I prefer postal history, I tended to view exhibits that have that sort of focus.  And, it should not seem odd if I have an attraction for an exhibit that shows material from the same 1861 United States issue that I favor. 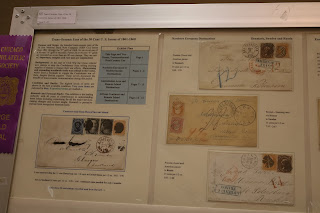 How about a little bit on Trans-Oceanic Uses of the 30 Cent U.S. Issues of 1861-68 by Rich Drews?  Sure, I can enjoy that!  Rich has a knack for putting some of the most amazing 1861 issue items out for others to appreciate in his exhibits.  Let's just say he showed a few items that I would have loved to move from his pages to mine.  But, since that will not happen, I was pleased to have a chance to enjoy them in this fashion.

The last two exhibits might give you a taste of how wide the range of topic area can be at a show like Chicagopex.  Most people can find something that they can relate to at some level or another.  I was able to find a couple of exhibits that actually focused on different values of the same stamp issue I favor.  Topics that are closer to my own area of expertise are easier for me to quickly appreciate BUT it is also possible that I will get stuck on missing details that I know, but the exhibitor doesn't feel are important!  On the other hand, topics that are further away from my experience can be more difficult for me to fully appreciate, but it is certainly unlikely that I'll have a strong opinion about details. 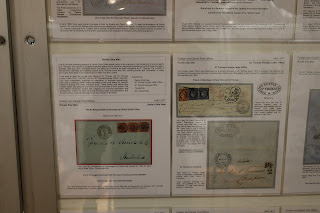 Speaking of connections with what you know and what you do not know.  Matt Kewriga's exhibit titled Danish West Indies Foreign Mail to UPU is an example where there is overlap with my own area of knowledge and yet, there is so much that is new for me to experience as a viewer.  Our time periods overlap and the connections we both have to ocean going vessels carrying the mail gives me a starting point towards understanding what Matt is doing here.  On the other hand, the routes and rates he explores are not the same as the ones I work with most of the time.

There were 70 to 80 exhibits at this show with all sorts of topics - lots of slices of the bigger pie.  I apologize that I could not show every single thing I enjoyed in this blog post.  I will admit that some of the limitation has to do with the quality of the photos I took - leaving me to exclude many I wanted to show.  For example, I spent time appreciating Jerry Miller's work on his Evolution of the German Post Office in China and with Emory Earl Toops' Provisional Issues of South Viet Nam - among many others - but the photos were unusable.

The real issue is a combination of time and space.  We all do the best we can do.

With that said, thank you to all who exhibited at Chicagopex in 2021, I appreciate your efforts and I know we can all relate to the struggles and joys with the process.  To the judges and to the people who do all of the organizing for the show and the competition - thank you.  I recognize and honor your time and energy that provide us with the opportunity for us all to exhibit things we enjoy and share them with others.

Thanks for joining me for my "live" report at Chicagopex.  We'll get back to our more traditional material next week.  But, for now, I hope you have a great remainder of your weekend and a wonderful week to come.

You might notice that I include some awards after some of these descriptions.  The awards were released just after I had completed this Postal History Sunday, so I went back in this morning to add some of the recognition.  In addition to these awards, I was surprised and honored to have been given the Grand Award for my exhibit, The Postal History of the 1861 United States 24-cent Adhesive.  This is the second time this exhibit has won a show "grand" award - and each time I was fairly certain that I would do well enough, but not THAT well.
Posted by Rob Faux at 6:32 AM