This week's entry might be the closest I've come to not providing Postal History Sunday for those who enjoy reading it for the past two years.  The other notable moment in the history of this series was the weeks immediately following the removal of a kidney from yours truly.  This time around, my partner, Tammy, had surgery to repair a badly damaged Achilles tendon this past Thursday.  Things went well, but I am sure many of you have had enough experience with such things to know how much these events take one's time and energy when they occur.

Take a moment to tuck those worries into the trash can and take them out for your mother, your spouse or yourself and then come back and maybe learn something new.  Put on some fuzzy slippers.  Get yourself a beverage of your choice.  And let's see where we can take you this week. 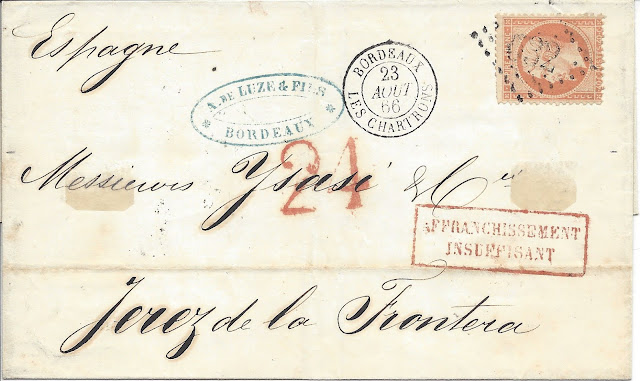 Paying the Postage - Sort of

We're going to start with a letter that was mailed in August of 1866 from Bordeaux, France to Jerez de la Frontera (near Cadiz), Spain.  The sender paid the postage for a single weight letter, but it was found to be too heavy and required more postage.

Many weeks ago, we showed a series of items that traveled from the United States to the United Kingdom.  Several of those items did not have enough postage - so they were treated as if they were completely unpaid.  The French and Spanish had a different sort of agreement during the 1860s.  This agreement provided for some credit when a person put postage on an item - even if it was not enough postage.  But, there was still a penalty for the short payment.

The postal convention between these two countries was put into effect on February 1, 1860.  To make matters simple for explanation in a blog post, the basics were as follows:

Do you see a possible problem?  I sure do!  Technically, an item that weighed 7.2 grams would be light enough for a single rate in France, but it would require a double rate in Spain.  Clearly a recipe for potential problems.

The treaty also allowed people to send letters UNPAID.  If they opted for this service, the recipient would have to pay a different rate to receive their letter.  If a resident in Spain received an unpaid letter from France, they would have to pay 18 cuartos for every 4 adarmes in weight.

So, what happened if a person paid for a letter that they thought was light enough for a single rate letter (40 centimes), but it actually required double rate postage?  Well, we get to find out because that is exactly what happened with the item shown above.

Apparently, the French post office was aware that this item weighed too much, so they put the red boxed marking on the cover which reads "Affranchissement Insuffisant" (insufficient postage).  I believe it was the French traveling post office on the train to Irun that calculated the amount due and put the big red "24" on the front of the cover.

So the recipient in Jerez had to pay 24 cuartos for the honor of receiving this letter, even though their correspondent thought they had paid enough.  Why? It weighed more than 7 grams and no more than 7.5 grams.

So, how was the amount due calculated?

And there you have it.  Underpaid mail was penalized for failure to prepay the service properly by charging the unpaid mail rate to calculate the total fee due.  However, unlike many other mail agreements of the time, this one actually gave some credit for the attempt to prepay the postage.  But, if you think about it a little harder, you will realize the recipient actually paid as MUCH as the sender would have paid if they had calculated the amount due correctly in the first place. 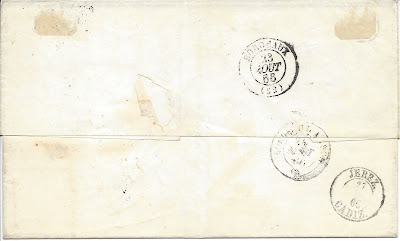 How Did It Get There?

Postal markings on this cover:

Les Chartrons is a district that borders on the Garonne River in Bordeaux and the first two markings likely show the progress from a branch post office in that neighborhood to the main Bordeaux office.  From that point, the Bordeaux A Irun marking shows that this mail item boarded a train and the traveling post office on that train served as the exchange office for France.  From there, we have no markings to confirm the direction of the voyage through Spain, though we can certainly speculate the most likely route.  The remaining marking is from Jerez - Cadiz, which apparently served as Spain's exchange office in this case. 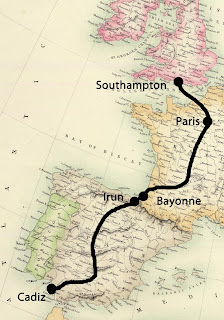 The map shown above illustrates a generalized view of the mail route via Paris for mail from England to Cadiz, Spain.  Of particular note is the fact that France and Spain ran their railways on different gauge (sized) tracks.  The Spanish were quite a ways behind the French and other European nations in developing rail services.  Needless to say, with fewer rail options, it is a bit easier to make an educated guess regarding the route. 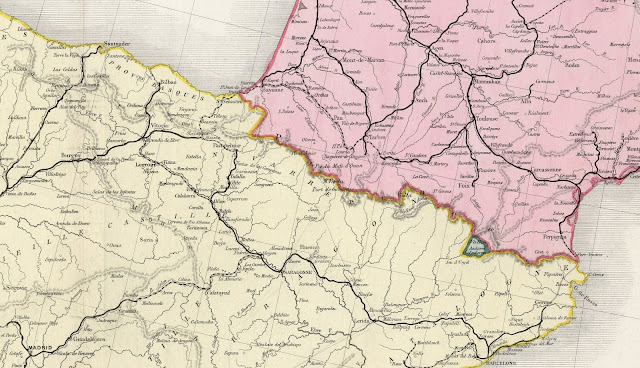 The map of the border between France and Spain from 1863 shown above clearly indicates that a rail route via Irun was planned.  On April 8, 1864, an agreement was reached between the two countries that trains from France to Spain would terminate in Irun (in Spain) and trains from Spain to France would terminate in Hendaye (in France).  The two countries would run track to the terminus of each location on their own gauge and each train would return across the border empty, though they could load with return traffic in their own country's territory.  This site provides both modern and historical context.

Since my best reference at present is this map, I cannot be certain that rail service was available for the entire route in 1866, nor can I be sure that the rail line south of Madrid to Cadiz was in service.  That will be work for some other day.

In this case, the letter was mailed as a double rate letter from Marseille, France to Madrid, Spain.  Unfortunately for the recipient, the letter was found to be underpaid and they were required to pay 30 cuartos to receive this piece of mail. 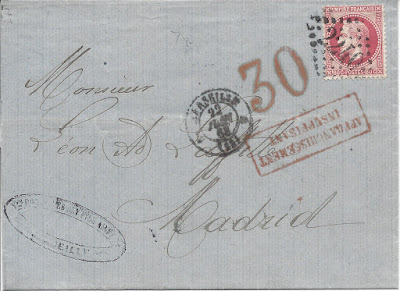 Once again, the red box with "Affranchissement Insuffisant" was applied to indicate that the postage was insufficient to pay for the letter to get to the destination without further payment.  The bold, red "30" indicated that 30 cuartos were due at delivery.

Just as a reminder, the process for short paid mail between France and Spain at the time was to determine the postage by using the higher UNPAID mail rate.  Once that amount is calculated, credit is given for the amount of postage paid.

The weight of this item was greater than 8 adarmes (roughly 14 grams) and no more than 15 grams.  This explains why the person mailing thought 80 centimes was enough.  After all, that was the correct amount by the French calculation (40 centimes for every 7.5 grams).  But, if it weighed 14.5 grams, the Spanish weren't going to see it that way because they expected a rate for every 7 grams!

Once again, unpaid mail from France to Spain is charged 18 cuartos for every 4 adarmes in weight.

Getting from Here to There

Readable markings on this cover:

There were actually two land access points between France and Spain over which mail (other than border mail) could travel.  One in the east at Le Perthus/La Junquera and the other at Irun/St Jean de Luz.  Development of a rail crossing at Irun progressed much more quickly and was available by 1868, so even though this letter originated in southeastern France (Marseille), it was actually more efficient given rail schedules and the eventual Madrid destination to use French rail services to get to the western border crossing.

In viewing the map below, Marseille would be located just off the far right edge of the map. 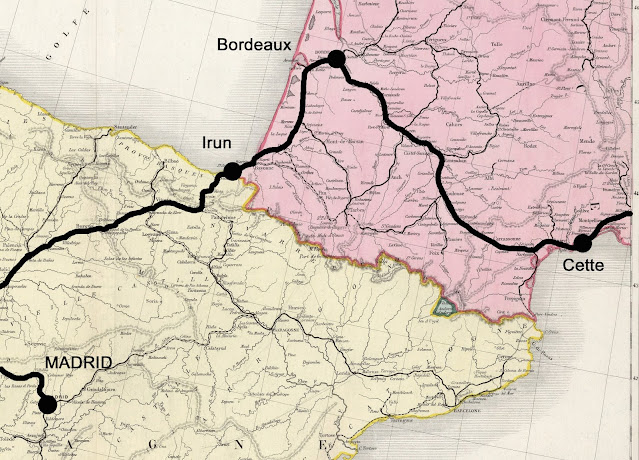 A Word or Two About the Correspondents

Leon A Laffitte pops up in various documents as giving testimony regarding the status of an early art collection in 1863, presumably as part of his profession as a banker.  His profession was an educated guess, given other references to a Laffitte (or Lafitte) family in Madrid involved in banking.  However, I was able to find more information in A Guide to Sources of Information on Foreign Investment in Spain by Teresa Tortella (2000).  This book includes information that could be useful for tracking business people down in Spain.  The following was taken from that resource.

It Wasn't Just France and Spain 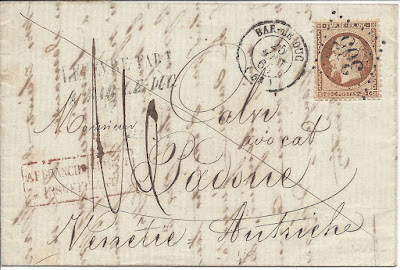 Ok, maybe it has something to do with France...  Here is a letter sent from Bar-le-Duc, France to Padove, Venetia in 1865.  At this time, Venetia was under Austrian control, which means the postage rates to Venetia were the same as those for letters sent to Austria, but not the same as rates to Italy.

Why does that matter?

I could certainly make things more complex by telling you that the Austrians used yet another weight measurement (1 loth was about 16 grams), but that doesn't come into play with this item.  It is far more likely that the sender simply identified Padova as a part of Italy rather than Austria.  But, the good news for them was that the French and Austrians also agreed that postage paid - even if it was not enough - should count for something.

Just like the agreement with Spain, Austria and France had separate rates for paid and unpaid letters.  The prepaid rate was 60 centimes per 10 ounces and the unpaid letter rate was 80 centimes.

After awhile, you start to recognize that the postal clerks that handled foreign mail throughout the world in the 1860s had a job that was a bit more complex than you might expect.

No Explanation for This One! 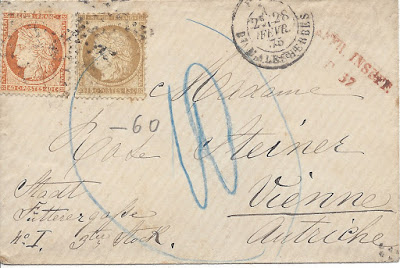 In each of the three previous examples, it wasn't too hard to speculate as to why the sender applied the wrong amount of postage.  In fact, I think it would be safe to say that the sender likely thought they had done everything correctly to avoid having the recipient pay any extra money.  But, I can find no such explanation for the letter above that was sent from Paris, France to Vienna, Austria in 1875.

The rate was still 60 centimes per 10 grams, though it was soon to change for a lower amount with the General Postal Union.  The sender attached a 40 centime stamp and a 15 centime stamp, totaling 55 centimes.

The postal clerks didn't care what the reason was, they just simply marked it as short paid (red marking at top right), wrote the expected amount in pencil (_60) and calculated the amount due from the recipient (a blue 10 in a circle).

Why a Different Rate for Unpaid Mail?

With the invention of the postage stamp (the British issued the first one in 1840), the idea that letters should be prepaid in full, rather than sent collect (or partially paid) gained strength.  It was not at all uncommon for recipients to simply refuse mail rather than pay for it.  This was especially true with the extremely high rates of postage required for items that had some distance to travel.

It should not be surprising that postal services would rather receive payment up front rather than risk receiving no compensation for services rendered.  To encourage prepayment, many postal services offered lower rates for prepayment, while others simply added an additional fee for underpaid or unpaid mail.

And, there you have it!  Another Postal History Sunday in the books!

I hope you enjoyed reading about something new and that you have a good remainder of the weekend and see good things throughout the coming week.

How You Got There Matters - Postal History Sunday 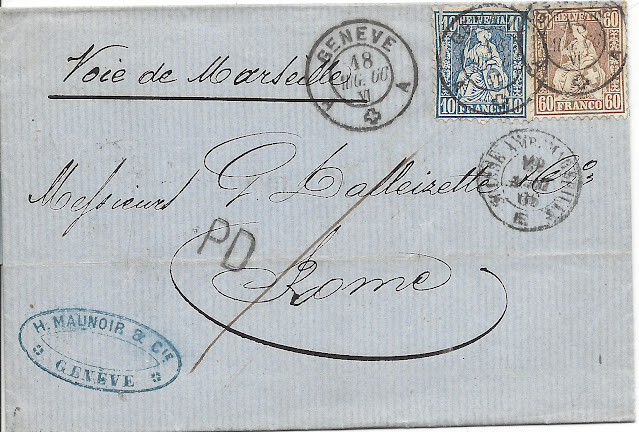