I started this week's PHS post more than once and was having a difficult time getting anywhere with it.  I started and stopped on three different topics and just couldn't go much further than loading up an image or two and writing a couple of lines.

You see, I invite you here to join me as I discuss something I enjoy.  I am hopeful that you will feel comfortable and you will be entertained as you (quite possibly) learn something new or read about something that you might find interesting.  I was forgetting that I should also have some fun with the process.  This is a chance for me (and you) to decompress a little.  So, let's see if I can manage that.

Things I Never Thought I'd See

As a young stamp collector, I remember seeing pictures of items that were interesting - but far beyond what I could ever hope to own.  Part of the issue was that I was a typical young collector in that I wanted everything.  It was exciting and interesting to explore everything you could possibly find in the hobby.  The other problem, of course, was that spending 25 cents for one item was a big deal.

There were a few pictures of older (and more valuable than 25 cents) stamps in the beginner stamp albums most kids worked with.  Things like the "Black Jack," a United Stamps issue of 1863 that shows an over-large representation of Andrew Jackson. 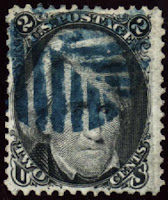 You can imagine how I felt when I finally was able to have one of these in my own collection years later.

I recently had the opportunity to acquire another such item and I thought I would share that with you today.

The Pile of Envelopes Stamp

Another very odd item that got my attention early was this octagon-shaped design that depicted a pile of letters.  You see, most of the older stamps showed a bunch of "old dead guys" and here was something that was very different from other stamps that were created in the 1800s to pay for mail. 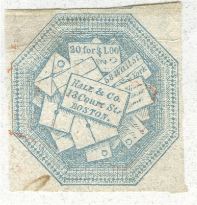 No, the item shown above is not mine.  I just grabbed this image from a presentation file I have on the topic of this particular issue so I could illustrate the design.

Over the years, as I started paying attention to postal history (instead of just the stamps) I began to realize that this was probably not something I was going to add to my collection.  Pieces of mail with this stamp just didn't show up all that often, and when they did...   Well, my budget was going to go elsewhere for the hobby.

But, this December, there was an auction of material being offered where there was not just one, but hundreds of lots featuring this design.  One individual had been accumulating and studying these for some time, ultimately writing the definitive work on the topic (an excellent work by Michael Gutman).  The time had come for him to part with the collection - which meant there was actually an opportunity for me to *maybe* pick one up at a price I could afford.  After all, this was an advantageous supply vs demand situation.  The supply of these stamps on letters available for purchase was probably going to never be higher and the demand was not sufficient to keep prices high.

Long story short - I was able to pick one up!

James W. Hale created a network of private post offices and mail delivery routes in 1843 centered around New York and Boston.  Hale had this stamp design created in 1844, printing them in sheets of twenty.  Patrons could purchase a single stamp for 6 cents, which would pay for mail service between Hale's offices.  To encourage repeat business, a person could buy a whole sheet of 20 stamps for one dollar (5 cents per stamp).

To put this in perspective, the first United States Postal Service stamp was issued in 1847.  The British had issued their first stamp in 1840.  Printing stamps to show payment for services was still a very new thing and Hale was very much on the forefront of this innovation.

Below is the item I was able to acquire for my own collection.  All I was looking for was a presentable example.  I was perfectly happy to let others bid on the host of other items with more 'going for them.' 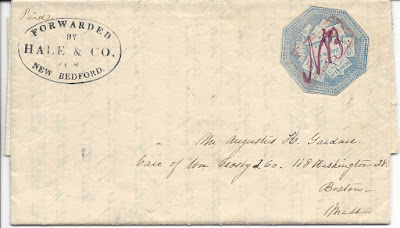 This folded letter was sent by Susan G Spooner of New Bedford, Massachusetts to Augustus H Gardner in Boston on July 12, 1844.  The blue stamp with the "NB" pen marking showed payment for the 6 cents required to get the letter from New Bedford to Boston.  It did NOT pay for delivery directly to Mr. Gardner.  It is likely that it was picked up at the Hale & Company offices in Boston.

The distance traveled was a little over 50 miles, so a similar letter sent via the US Postal Services of the time would have been 10 cents (for distances over 30 miles and up to 80 miles).  A four cent difference (and perhaps 5 cents if Ms. Spooner bought a whole sheet of stamps) was not inconsiderable in 1844.

While a person could certainly write in much more detail about Hale & Company, I'm going to keep it short - which would be in keeping with the relatively short period that these stamps were used to show payment for carriage by Hale's independent mails.  Congress passed new laws that were enacted on July 1, 1845 that reduced postage to 5 cents for distances up to 300 miles and made it unlawful for alternate postal services to operate as Hale's had done.

The entire letter is present, with a couple of holes that make it hard to read a few words.  Apparently Susan Spooner wrote as she talked and she randomly applied punctuation as it suited her taste.  I have added some punctuation to increase readability... I think.  Feel free to click on the image below to get a taste of what the letter is like. 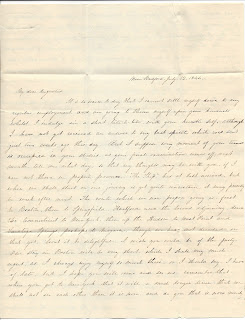 Augustus appears to have written (as a docket on the letter) the pertinent dates for this correspondence, which was a common practice for the time.   Perhaps we shall never know if Susan took it poorly that Augustus waited over two weeks to respond to her letter.  Did she meet him in Boston?  Was he, perhaps, more interested in his flirtatious, pretty friend who appeared to be attracted to Mr. Williams?  Or maybe, he was just busy trying to pass his exams.

I hope you enjoyed today's entry in the Postal History Sunday archives.  Be well everyone!
Posted by Rob Faux at 7:21 AM 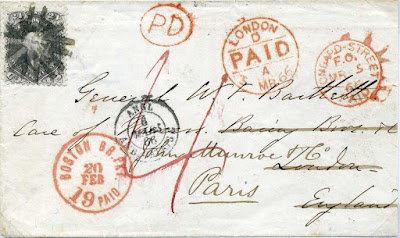